A little background on our new house…
When Neil and I bought the property in January 2009, there was an existing house on it. It had been many years since this house had seen any love and it was actually rather scary. Pieces of it were salvaged, but most of it was recycled when we demolished it. Due to its state, we had to get a construction loan to close on the property. Since there was only a month to design and put together Construction Documents, we decided to use one of the stock plans my firm sells through its GoodFit Plans division. I choose a plan I was project manager for a few times and I modified it to fit our needs and those of the site. The original plan was the Kaleah…we joke in the office about naming plans after ourselves, so I named this one the Karina. I made it more narrow in the main body, a bit taller, pulled out the dining room a bit, stretched the back bedroom/study, added a side door and wrapped porch because of the alley access, flipped the master suite to the back of the house (away from the main road), modified the main bathroom and simplified the framing. The house opens up to the South with large windows and from the wrapped porch we will step down to a patio. 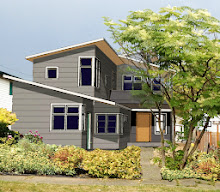 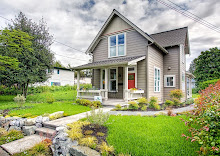 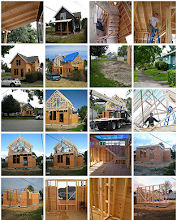